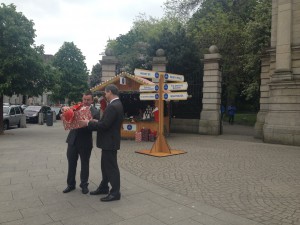 Formally launched by Dublin City BID and Brian Hayes, Minister of State at the Office of Public Works (OPW) today, the ‘Dublin at Christmas’ Market will run from Thursday 13th November until Tuesday 23rd of December.

Already a popular attraction in Galway and Belfast where the markets attract over 600,000 people over a four week period, the Dublin at Christmas Market is expected to generate an additional €20 million for Dublin traders, as well as creating 150 seasonal jobs.

With more than 60 trade concessions located in traditional wooden chalets along the exterior of St Stephen’s Green Park between Grafton Street and Merrion Row, the Market will offer a unique selection of quality Irish made handcrafted gift items, including accessories, woodcrafts, jams and preserves and prints as well as seasonal food and drinks to include charcoal grills, crepes, bratwurst, chocolate fountain, Gluhwein as well as other seasonal non-alcoholic drinks.

Traditional Christmas Markets originate from the centre of Europe, and are extremely popular in countries including Austria, Germany, Northern Italy and France. While Christmas is a peak time for retailers, Christmas Markets have proven to be extremely successful in attracting additional people into town centres and encouraging consumers to spend their money locally as opposed to shopping online.

Entertainment from local choirs and carollers will also help get visitors into the festive spirit. The markets will be organised in conjunction with the official Dublin at Christmas celebrations, and will be launched on the same day that the Grafton Street lights are turned on, transforming the city centre into a winter wonderland.

The market will be free to the public and will open daily from 12 noon to 8pm.

Minister of State at the Office of Public Works Brian Hayes added: “I am delighted to launch the Dublin at Christmas St Stephen’s Green Christmas Market. In recent years, there has been a significant change in shopping habits with consumers conducting more and more of their Christmas shopping online from international brands which has little or no benefit to the local Irish economy. These markets will help bring additional visitors into Dublin city centre, ensuring they can shop for the best of Irish produce while benefiting local Irish businesses and creating seasonal jobs.”

Speaking at the launch, Richard Guiney, CEO of Dublin City BID said: This year we are delighted with the addition of the Christmas Market at St. Stephen’s Green.“ Dublin is a magical place at Christmas, every year visitors comment on the unique atmosphere of the city. Traditional Christmas markets have proven successful in attracting significant visitor numbers into city and town centres in Ireland and abroad, encouraging people to shop and absorb the city’s festive spirit. We envisage that the Dublin at Christmas St Stephen’s Green Market will attract more than 600,000 additional visitors to the city centre over the six week period adding to the buzz and excitement of the city experience.”

Keith McCormack, Director of Dublin at Fáilte Ireland concluded: “Traditional Christmas markets are a relatively recent addition to the festive season in Ireland. We are very pleased with this addition to the existing programme of events for Dublin at Christmas. Dublin has performed well in recent years during the Christmas period and the NYE Dublin Festival has delivered beyond expectations. Having a traditional Christmas Market in the heart of the city will greatly improve the Dublin proposition. We look forward to working with the organisers to promote the event.”

Dublin City BID has worked closely with the Office of Public Works, Dublin City Council, An Garda Síochána and Dublin city transport providers Dublin Bus and Luas to plan and develop the Dublin at Christmas Market.

For more information on Dublin at Christmas Markets, visit www.dublinatchristmas.ie for updates.

Dublin City BID is a not-for-profit organisation charged with creating a welcoming and economically viable city environment. It is a collective of 2,500 businesses in the city centre, from St Stephen’s Green to Parnell Street, and works with its partners to enhance the appeal of the city centre as a place for shopping, recreation and business development. For more information, see www.dublincitybid.ie and www.dublintown.ie

Organised by Dublin City BID and produced on their behalf by Milestone Inventive, organisers of the existing hugely successful Galway Christmas Market, the Market will run from Thursday 13th of November to Tuesday 23rd of December. The Market will be free to the public and will open daily from 12 noon to 8pm. There will be approximately 60 trade concessions. The Market will run along the footpath area on the exterior of St Stephen’s Green Park on the Grafton St. and Dawson St. side. The Market has been made possible by the support of Minister Brian Hayes and the Office of Public Works. 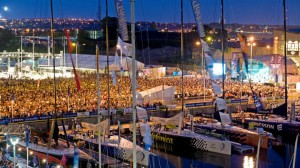 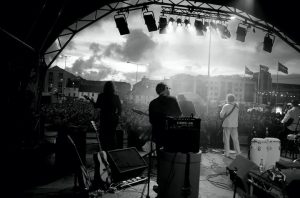